From early Koto times through today, false signatures have been a problem on Japanese swords. For numerous reasons, the names of famous smiths (mei) have been added to sword tangs (nakago) of swords which were not made by them. While false signatures (gi-mei) are not a major problem with gendaito (swords made in the 20th Century), they can be a significant problem with swords of the Koto, Shinto and Shinshinto periods. It is usually the names of well known smiths which are forged. Swords by lesser known smiths pose little risk of having false signatures.

Very few westerners have the expertise to judge accurately whether a signature is authentic or not. To be reasonably certain as to the maker of a specific sword, it is necessary to submit the sword for shinsa (judging) by one of the major Japanese sword study associations (NBTHK or NTHK). These organizations will judge the sword and issue appropriate papers (origami) attesting to the swords authenticity and/or historical importance. Shinsa are normally held only in Japan; rarely in the US or elsewhere.

WARNING: There are fake "official" looking origami from fictitious Japanese organizations which are being sold to make some swords appear legitimate and more valuable.

The NBTHK (Nihon Bijutsu Token Hozon Kai) has been issuing origami since the 1950's. They operate the Japanese Sword Museum in Tokyo. The NBTHK shinsa are held only in Japan. The nature and names of their origami have changed over time. The NBTHK issued the following types of origami starting in the 1950's.


This ranking scale was changed in the 1980's. The current system of origami includes the following types of origami.

To be awarded Juyo papers a sword normally has first received one or both of the lower grade origami .
READING NBTHK ORIGAMI

The current NBTHK origami for sword blades all have the same basic seven column pattern (see the example below).
Reading the columns from right to left, the following information is given:

column one is "Kanteisho" (certificate of authenticity)
column two is the length of the blade (x shaku, x sun, x bu)
column three will start "ichi" then read either katana mei, wakizashi mei, tanto mei or mu mei depending on the blade.
This is followed by the signature on the nakago or an attribution to the school and/or smith if the blade is mumei (unsigned)
(attributions are commonly in parenthesis)
columns four and five will read -"This sword has been judged at the NBTHK to be Hozon"
(or Tokubetsu Hozon, Juyo Token or Tokubetsu Juyo depending on the level of origami)
column six is the date of the shinsa
column seven is the NBTHK name and seal
A photograph or oshigata of the nakago is attached at the far left of the origami.

The following ratings can only be granted by the Japanese Ministry of Education. These ratings are seen only on items of great artistic, cultural and historical value. Swords with these ratings are not found outside of Japan.

The NTHK (Nihon Token Hozon Kai) also issues origami which are held in high esteem. NTHK shinsa are occasionally held in the U.S. in conjunction with a special sword event. The NTHK sword rating system includes:

The origami issued by the Nihon Token Hozon Kai all follow a basic pattern. The example below shows a typical NTHK origami and the type of information given in each section.

The NBTHK and NTHK tend to stress slightly different qualities in judging a sword. The NBTHK tends to judge rarity and historical importance as major factors whereas the NTHK judges condition of the sword as the primary factor. A sword to be submitted for shinsa should be in good to excellent polish; the higher the rating applied for, the better the polish must be. There are also various privately issued origami done by recognized Japanese scholars and individual sword authorities. These can be beneficial in authenticating a sword, but are not usually held in the same esteem as those by the NBTHK or NTHK. Both the NBTHK and the NTHK also issue origami for tsuba (sword guards), kodogu (fuchi-kashira or menuki) and koshirae (full mountings) using the same rating scale. 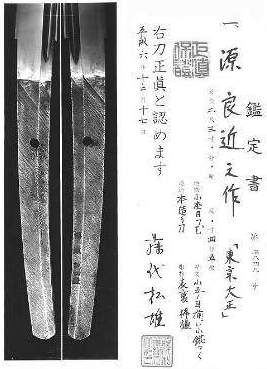 While not origami, the Fujishiro system of rating swordsmiths is widely used by collectors and students of Nihonto. It is based on the two volume set, Nihon Toko Jiten, by Matsuo Fujishiro. Fujishiro rated smiths of the Koto, Shinto and Shinshinto eras. This rating system applies to swordsmiths, unlike the NBTHK and NTHK origami which are awarded to a specific sword blade. In the Fujishiro rating system, the swordsmiths are rated:


Fujishiro lists only the better swordsmiths of each era; thus any rating by Fujishiro is considered good. The Fujishiro books also show documented signatures (mei) of many of the swordsmiths listed, thus the books are widely used to compare swordsmith signatures (mei) for the purpose of authentication. Fujishiro also issues personal origami for sword blades (see right; oshigata for blade by Minamoto Yoshichika courtesy of Ron Polansky.).

This organization was founded and operated by Murakami Kosuke sensei, a student of Hon'ami Koson, and once a member of the NBTHK Juyo Shinsa. The organization issued several levels of papers which are quite highly regarded. When Murakami sensei passed away some years ago the group disbanded. (Information courtesy of Arnold Frenzel).